The History and Evolution the Shipping Container

The History and Evolution the Shipping Container

The history of containers is a relatively recent one. It’s been nearly 60 years since the introduction of the first shipping container.  Like many new ideas and concepts, it was based on a previous idea and then improved upon. The idea of the first shipping container is no different. Before the introduction of the shipping container, cargo was handled on an individual basis using cranes and slings. This was was highly inefficient as it required incredible manpower, it was very time consuming, and often resulted in lost or damaged cargo.

This was how the industry had always operated up until 1956.  It was then that Malcom Mc Lean experimented with the first concept of a shipping container.  At the time, he was the president of McLean Trucking Company, and was trying to figure out a better way to load and unload cargo from ships.  This is when he first tried placing one of his loaded 35-foot highway trailers meant for his trucks onto a ship using the same traditional cargo sling methods.

His experiment was successful, but it was still a crude concept.  The highway containers he used still had the chassis and wheels attached used for trucking.  He quickly realized that these were unnecessary and the only thing that should be loaded or unloaded was the box with its contents.  The problem was that the chassis and wheels were permanently attached.  And with that, the concept of “the container” was created.

Little did Malcom McLean know that in his attempt to create a better way of loading and unloading cargo, he would spur a transportation revolution and be the forefather of what is known today as “containerization.”
Once it was understood how much better it was loading and unloading cargo via containers,  changes in the industry were completely overhauled from top to bottom. It was quickly understood that a new system of transportation would have to be created.

Since cargo came in every shape and size, containers had to be designed to accommodate these differences.  New ways of loading and unloading containers were also invented, specifically tailored at simplifying and speeding up the process of the loading and unloading process.  Facilities were introduced at ports allowing them to transfer containers directly from ships to ground transportation. Trucks and railroad cars had to be specifically designed to accommodate these new containers. Truck chassis were also designed for containers, which allowed containers to be directly loaded onto and unloaded from the chassis.

In order to handle all these different types of containers, standardized dimensions would have to be implemented.  This allowed the containers to be stacked on top of each other, and so the loading and unloading equipment could be designed to those standards.

It was understood that different cargo would require both different size and types of containers.  It started with the general purpose container.  It was used for dry non-perishables such as electronics, clothing, and other packaged and manufactured goods.

Refrigerated containers (or “Reefers”) were designed for perishables using refrigeration units inside these units to help preserve climate control for shipping vegetables and flowers.  The most common and widely used size containers were 20-foot and 40-foot container.  Of all the containers in the world, about two-thirds are 40-foot and about one-third are 20-foot.

Today, containers of all shapes and sizes are used on every continent.  It seems that everywhere you look, you can find a container.  With importing and exporting cargo continuing to grow in most countries, containers will continue to be an integral part of how we move products in bulk from one place to another!

With currently over 42 million shipping containers in the world, containers are constantly being manufactured daily and have turned into everyday sights that have shaped today’s economy and international trade.

Shipping containers are highly standardized and regulated to be used internationally across various modes of transport. Standardized by both the size and materials used to build them —  as governed by the internal management of the ISO (International Organization of Standardization) — container specs are consistent and recognized globally.

Due to the strength at the corners, these units can often be stacked 6 containers high full of materials. The double doors are hinged and open up flat against the sides of the container to enable the most space to load cargo. Doors come with steel rotating locking bars and have rubber gaskets to ensure a completely sealed and weather resistant unit. The tropical hardwood floors are close to 1.5 inches thick and are treated to resist infestation.

What you can read next The Cost of a Shipping Container Depends on These 5 Factors Rental Container Handbook: All You Need in One Guide 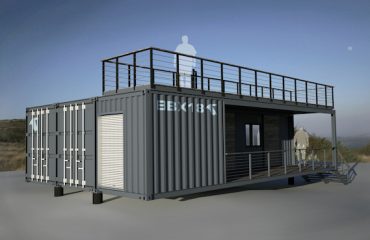